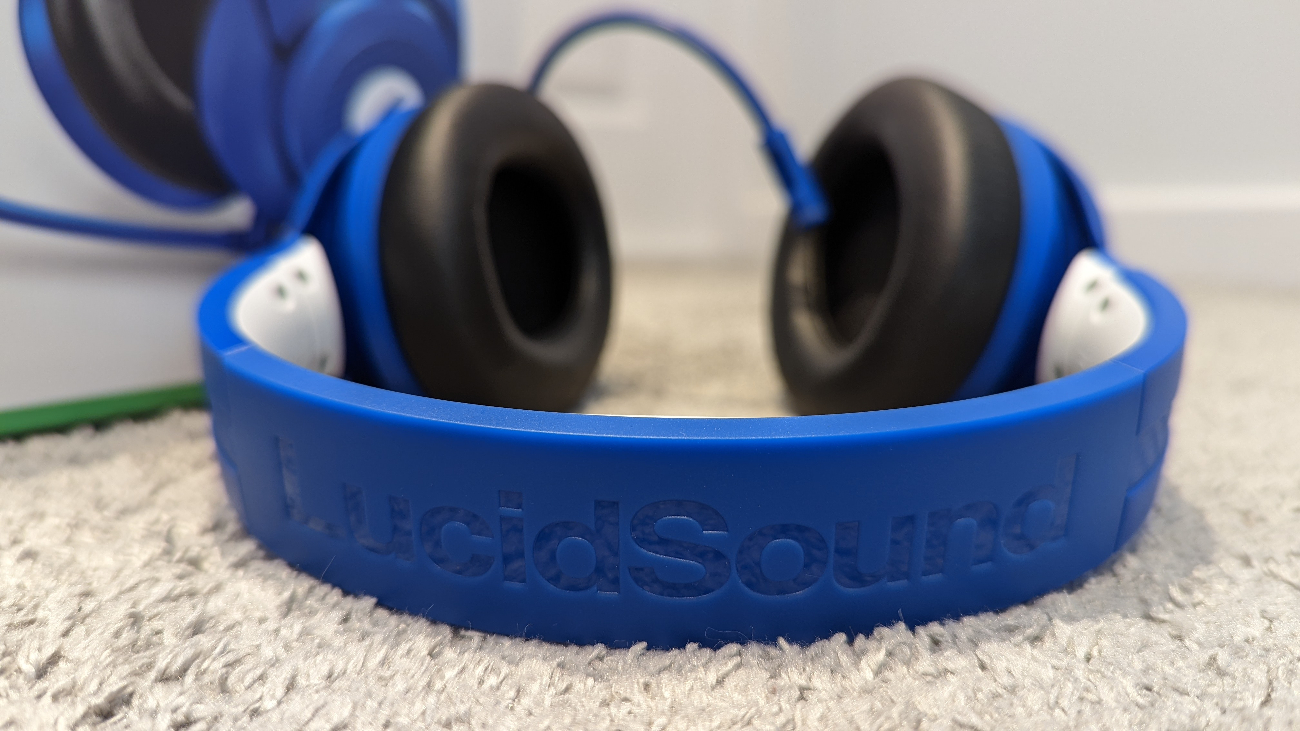 Over the course of the last six years or so, LucidSound have really come on in the gaming market. A company who came out of nowhere to deliver us the likes of the utterly gorgeous looking LS30 in 2016, before teaming up with Snoop Dogg for official Limited Edition greatness in 2019, a year later they were bought up by those at PowerA. That doesn’t mean they’ve stopped filling the market with some great sounds though and with the officially licensed Xbox-centric LS15X headset, LucidSound are continuing to provide plenty of options.

LucidSound headsets certainly stand out from the crowd and with the Shock Blue flavour of the LS15X, there’s not a chance that you’ll be able to move stealthily in the gaming circles you frequent. Bright blue in colour with white detailing and styling, this is a headset which immediately works as a conversation starter.

It comes with the usual LucidSound stylings too, well designed and contoured as the plastic LucidSound logo’d headband merges neatly down into the cups. It’s all pretty minimalist too, with a carbon fibre styled detail feeding through the externals of the headband slider and right round onto the earcups themselves. That headband is well padded on the underside, with a neat, bright white sponge taking any pressure off of your head.

The cups themselves rotate nicely by 90 degrees to ensure that should you wish to sit the LS15X around your neck, you can do so with ease. They also come with plenty of flex and movement so no matter what the size of your head, they should fit with no fuss nor bother.

Aside from the Shock Blue colour, the LS15X is pretty much a minimal headset. There are buttons present on both the right and left cups, but these are integrated smoothly with the rest of the design, barely noticeable. This does mean that when you’re trying to reach and feel for the buttons with the headset on your head, things get a little tricky, but when discovered are ripe for pressing; whether that be the EQ button on the right cup that cycles through Natural, Signature Sound and Bass Boost modes, or the power button on the left.

Aside from a 3.5mm audio jack for wired connection, the Micro-USB port for charging (seriously LucidSound, Micro-USB?!?) and the detachable boom mic, that’s pretty much all that is available on the headset. You see, much like most other LucidSound headsets, volume control and game/party chat balance are worked via two huge dials linked to the externals of the earcups. Fully grabbable with ease, the dial around the right wheel lets you attempt to find a neat balance between your game and chat audio, whilst a press of that cup will see you able to mute your mic (with a short press), or switch on/off your mic monitoring (by holding it for a few seconds). To ensure you know when that mic is on/off and transmitting, a bright red led will glow on the end of the boom.

In terms of the controls found on the left ear cup and a similar system allows you to dial up and down overall audio volume, whilst a press will instantly mute all audio. This is extremely useful for when you need to kill the sounds incoming to your ears, and has been utilised many times over the few weeks we’ve been using this headset. It’s something you’ll find yourself using too, especially as the LS15X is capable of really taking you away of anything going on in the real world.

Pressing and holding that button on the left cup will also give you your headset battery level, and that is because the LS15X – whilst able to work with a cable if you wish, attaching it to a mobile device for instance – is primarily a wireless headset.

It attaches to your Xbox console via an included USB-A transmitter and connection to this is pretty much instant. We’ve not seen a single drop or issue in getting the LS15X up and running for our gaming sessions, and have happily grabbed at this whenever the chance has allowed. It’s been quite decent for the audio that has come into our ears too, and with the addition of that EQ button, it’s been absolutely fine to run a more bass-fuelled feel when the time has warranted it. Personally, we’ve found that LucidSound’s Signature Sound mode has delivered the best results, with very little in the way of any distortion coming about.

The LS15X is capable of delivering some very loud audio too. We’ve been left feeling a little short-changed from a couple of headsets in recent times, but this one goes right up to 11 and well beyond. In fact, whilst we’re not going to ever knock something for going above what is needed – we can of course just turn it down if we wish – we’re wondering how and why LucidSound have decided to allow for such high levels of audio. You’ll certainly feel immersed in your gaming sessions with these on your head, locked away nicely from the outside world.

The same can be said for the sound going out though and we’ve had few issues with using the LS15X for party chat. It’s not immediately perfect, requiring a fiddle of the chat balance to get things sitting how you wish, but when those ducks line up, this is perfectly suited for any games which require team comms. The detachable mic is highly flexible and easy to position, and is the preferred way to run, but if you can’t get on with that, or fancy using the LS15X as more of a lifestyle set of cans, a built-in secondary mic is also present.

The LucidSound LS15X headset for Xbox is a decent addition to the sub-£100 headset market. The styling is great, the colour even more so and the feel is absolutely fine. More than capable of getting as loud as you need, it sounds fairly decent too and whilst it’s not able to find a place as a daily driver for us, it’ll certainly appeal to many – particularly those who are looking for a well-priced wireless option.

Massive thanks go out to LucidSound for providing us a review unit of the LS15X for Xbox. You’ll be able to pick one up for yourself by visiting them direct. Or you can visit Amazon. Your call.