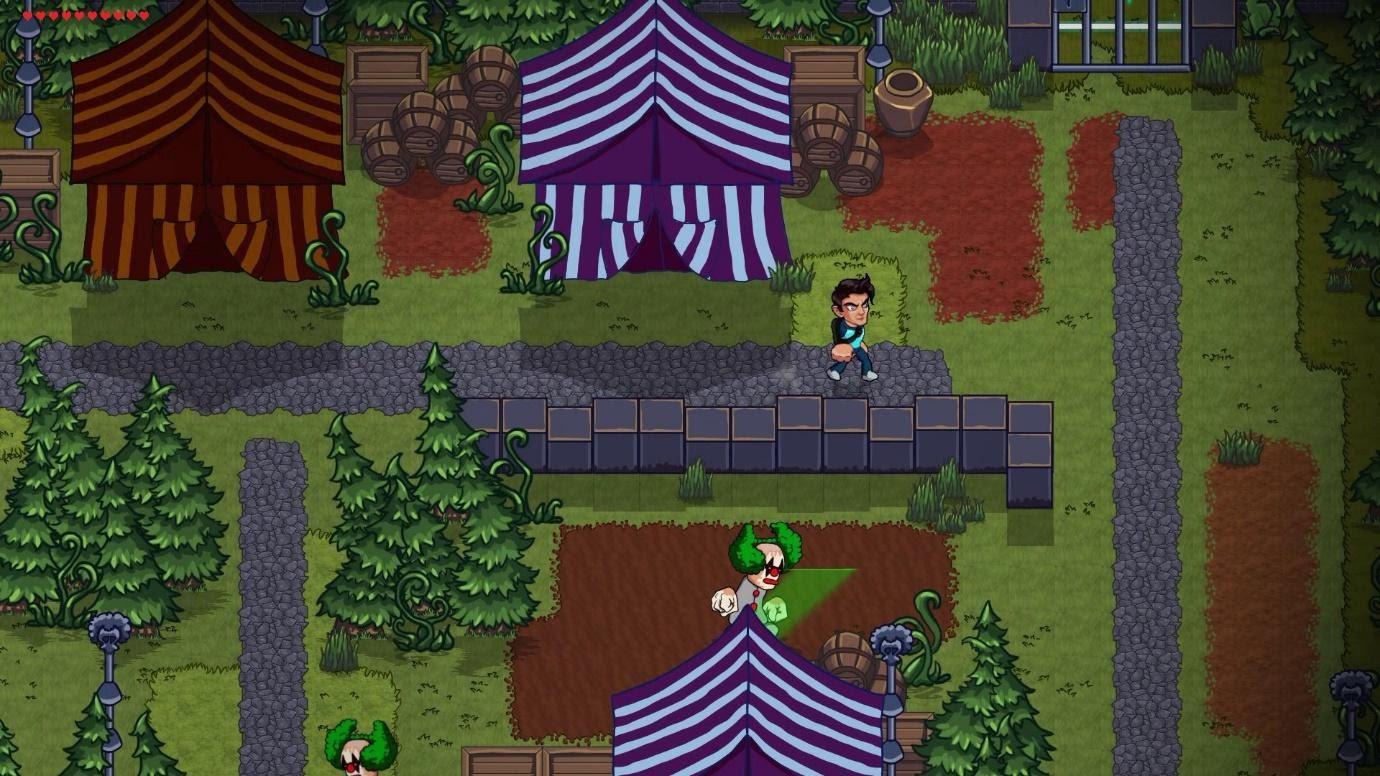 Videogame box art is a dying art form; what was once used to entice shoppers on a store shelf is no longer necessary in the age of YouTube and digital stores. Nowadays, gamers rarely take a punt on a new title unless it’s on sale or without extensive online research beforehand. Largely exaggerating the in-game action into a gorgeous work of art, videogame box art would often portray the main narrative of the gameplay far better than early games consoles could on screen.

The main art for Circus Pocus evokes a similar feeling after having finished the game. Portraying a very creepy looking clown looming over an unsuspecting young man, caulrophobiacs would do well to look away. The reality is different however; it’s still a fun game but one that feels like a generic 2D platformer with a creepy clown aesthetic blanketed over it.

After stumbling across a creepy looking circus in the woods in the middle of the night, two brothers decide to investigate it instead of running away. One brother gets captured, leaving it to the other to rescue him from the hordes of demonic clowns. These clowns are less scary than the ones found in Death Park but will still put the willies up anyone that doesn’t like them.

As the ‘free’ brother, your job is to navigate through plenty of perilous levels and rescue your sibling.

Circus Pocus is a 2D action platformer, with more than a hint of stealth to it. Initially, your sprite can only really avoid the gazes of the clowns. Get spotted and they will run to your last known location – indicated by a faint outline of your sprite – and attempt to kill you. Their cone of vision is limited before they spot you; when you are spotted, it is nigh impossible to shake them off. Thankfully, dying only sends you back to the start of each level, so it is sometimes easier to wipe and start again.

Later on, you will gain access to a weapon to allow you to be much more offensive. Attack a clown from behind and you can get a one-hit-kill on them, though this does not always trigger correctly. The weapon takes a few more hits when an enemy is front on, but is still effective. It has limited use though.

As well as the weapon, you can confuse the clowns by whistling to divert them off their programmed path. Failing that, there is a dodge mechanic that allows you to roll through any obstacle or attack that would otherwise cause you damage.

When not dodging hordes of undead clowns, Circus Pocus will regularly throw new ideas at you. There are a few boss fights to contend with, along with levels designed around other mechanics. Proximity mines, circular saws and a variety of other environmental obstacles are squeezed into Circus Pocus to prevent things going stale.

And then, occasionally thrown in, are levels that feel right at home in a circus. These involve jumping onto a ball and navigating it through obstacle-filled levels. This ball has a mind of its own and will require constant adjustments to successfully reach the goal. Sadly, there isn’t enough of these levels as they are a refreshing change of pace.

Despite the cartoon visuals and upbeat soundtrack, Circus Pocus is rated PEGI 16; not necessarily for horror as this depends on the player’s resistance to clowns, but for the violence. Kill a clown and it will just lay there in a pool of its own blood and there are blood sprays whenever you connect with the weapon.

The soundtrack initially felt like it was ripped from an open-source website but the more you listen to it, the more unsettling it becomes. It creates a weird paradox with what is occurring on screen and – whether purposeful or not – helps add to the ambience.

Circus Pocus also features a massive twist in terms of who the final boss is. I say massive, but you can probably work out who/what it is just from this review. Even so, do not expect a happy ending here.

Completable in less than an hour, Circus Pocus is another one of the ever-increasing number of Xbox titles that offers a ton of easy Gamerscore. Providing you can find the ten stars hidden throughout, this achievement completion should not cause any trouble at all.

There are some interesting level designs here and enough variation even through its short runtime to give you an excuse to try Circus Pocus. It won’t be winning any awards for innovation or execution, but it remains fun throughout and doesn’t last longer than is needed.

Escape the Evil Big Top in Circus Pocus on Xbox

Be the first one !