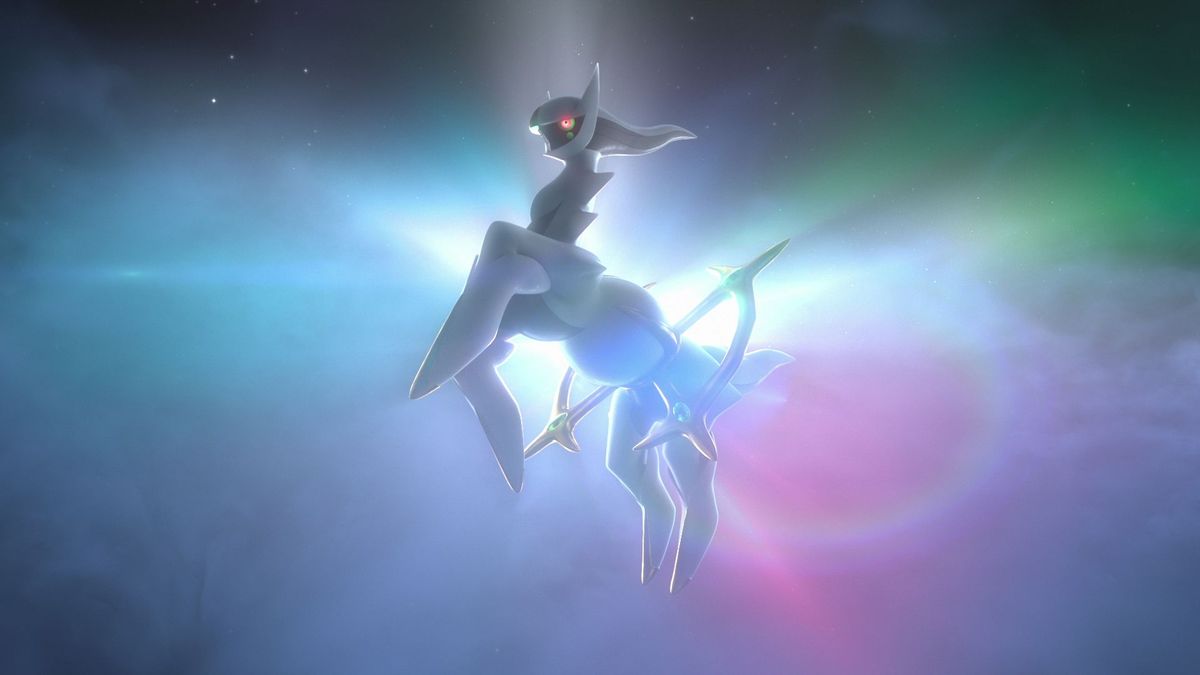 Pokémon Legends: Arceus is the highly-anticipated open-world Pokémon RPG, revealed during February 2021’s Pokémon Presents live stream, which celebrated 25 years of the Pokémon franchise. Further details were shared about the game during another Pokémon Presents showcase that took place on August 18.

Announced alongside Pokémon Brilliant Diamond and Pokémon Shining Pearl (remakes of the revered Nintendo DS titles), it looks like Pokémon Legends: Arceus is going to be the game that breaks new ground for the series, with a historical setting and an explorable open world.

Confirmed for Nintendo Switch, Pokémon Legends: Arceus will act as a prequel to the main series, taking players to a much older version of Pokémon Diamond and Pearl’s Sinnoh region (known here as the Hisui region), where Pokémon roamed freely, and they’ll be charged with completing one of the region’s first Pokédexes.

Pokémon Legends: Arceus is scheduled to launch worldwide on January 28, 2022 but in the meantime, we’ve gathered together everything we know about the game right here for your perusal.

Pokémon Legends Arceus will release on January 28, 2022, for Nintendo Switch. The Pokémon Company revealed the new Pokémon game’s release date with a tweet back in May, 2021. Pre-orders are live now.

Released on September 28, 2021, this Pokémon Legends Arceus trailer shows off new gameplay features, such as being able to ride Pokémon in the wild across land, air and bodies of water. You can even pull off trick shots with Pokéballs while riding to catch wild Pokémon.

New characters, known as Wardens, are introduced. It’s unclear as to how these characters will impact the game, but they seem integral to elements of the story.

A new Pokémon named Cleavor will appear as what the game is calling a ‘frenzied noble’. These Noble Pokémon act as boss fights, and it seems like the player trainer will have to calm them down through battle in order to catch them.

Finally, character customization has been confirmed, and players are able to dress their trainer in period-appropriate attire, as well as change up their hairstyles back in the hub area of Jubilife Village.

Gameplay trailer
Debuting at the August 18, 2021 Pokémon Presents livestream, this trailer gave us a more in-depth glimpse at what we can expect from Pokémon Legends Arceus. We got a better look at exploration, and how wild Pokémon can interact with the playable trainer.

Reveal trailer
Pokémon Legends Arceus was arguably the biggest news from the Pokémon Presents showcase, where it debuted alongside a trailer showing off some early in-engine gameplay.

Pokémon Legends Arceus returns players to the Sinnoh region, albeit in a time long before the events of any mainline Pokémon game. So old, in fact, that the region is being referred to as Hisui. The game evokes a historical Japanese setting, evident in its artwork, landscapes and character designs.

Pokémon Legends Arceus looks quite unlike any other effort we’ve seen so far in the series, and looks to expand on open-world elements found in Pokémon Sword and Shield. Those games featured a pretty scaled back open-world element, the Wild Area, which felt a little tacked on, like a separate entity to the rest of the game world.

In Pokémon Legends Arceus, it appears that the scope of the open world is far greater. Trailers so far have introduced us to the hub town of Jubilife Village, as well as the Galaxy Expedition team, from where you’ll prepare for your expeditions.

Stealth elements are likely to play a role in Pokémon Legends Arceus. In the trailers, we see the player character not only throw Pokéballs from great distances, but also perform a dodge roll and hide in tall grass. The recent showcase confirmed that not all Pokémon will react to your presence in the same way, and many will be hostile towards you.

Curiously, players won’t have to enter a battle in order to catch Pokémon. This is now done more fluidly via the open world, where players can attempt to sneak up on Pokémon, then aim and throw Pokéballs at them for a catch. Whether or not we can still catch Pokémon via battles remains to be seen, though.

Speaking of battling, that element of the series is retained in Pokémon Legends Arceus, featuring the familiar turn-based gameplay. Animations seem to be more theatrical and improved across the board, perhaps in response to a criticism often leveled at Pokémon Sword and Shield where battle animations were somewhat tepid.

By throwing Pokéballs containing your partner Pokémon near a wild one, you’re able to seamlessly transition into battle, according to the game’s website. This might make the game take an approach similar to that seen in the Pokémon anime series, and definitely has our interest piqued.

Pokémon games usually get you going with one ‘starter’ Pokémon at the outset of your journey, and that’s no different in Pokémon Legends Arceus. What is different, though, is that the three Pokémon on offer this time are all from separate generations. They are Cyndaquil (Gen 2), Oshawott (Gen 5) and Rowlet (Gen 7), representing the usual Fire, Water and Grass types respectively.

Pokémon Legends: Arceus will task players with filling one of the region’s first Pokédexes so it’s natural to wonder which Pokémon we’re going to be chasing down in the game. There’s no comprehensive official list just yet but thanks to our friends at GamesRadar, we do have a list of the twenty Pokémon that appeared in the game’s announcement trailer.

That’s quite a few so far. Given the game is set in the Sinnoh region, it’s not entirely surprising that there are a lot of Generation 4 Pokémon in that list and it seems reasonable to assume that their evolutionary forms will also probably be present in the game.

We expect that in the run-up to the game’s release, Nintendo and Game Freak will confirm more of the Pokémon that we can expect to see in Pokémon Legends: Arceus so we’ll keep updating this list as and when they’re revealed.

Boss fights
Revealed during the August 18 Pokémon Presents livestream, some Pokémon in the Hisui region will be more hostile than others. Especially strong Pokémon bore a red aura around their eyes, and would even attack the trainer directly. It seems like these encounters will be treated as boss fights, or harder fights at the very least. We expect to come across a lot of them in an effort to complete our Pokédex.

Base camp and regions
You’ll start any expedition by choosing a general area on the overworld map. From there, you’ll begin your journey at a base camp, where you can stock up on items from your inventory, or even buy and craft more of them.

You’ll also return to the base camp should you black out while exploring. This can happen if wild Pokémon hurt you too much, which means trainers will have to tread a lot more carefully than usual.

New Pokémon and variants confirmed
Just because Hisui will eventually become the Sinnoh region doesn’t mean we won’t be seeing any new Pokémon. In fact, the August 18 Pokémon Presents livestream confirmed just that. New Pokémon Wyrdeer and Basculegion will be joining the roster, and we imagine more new critters will follow.

Region-specific variants are also confirmed to be returning with the announcement of Hisuian Braviary and Growlithe. Previous games in the series have done this to great success, such as with Alolan Vulpix and Galarian Ponyta, so we’re glad to see the feature returning.

Pokémon Legends Arceus is already being compared to The Legend of Zelda: Breath of the Wild, and not without good reason. The surrounding landscapes and horizons look like they’ll offer the time-old adage of ‘if you see it, you can go there’.

It would be awesome to have an open world in Pokémon Legends Arceus as ambitious as that. We’re not asking for a 1:1 recreation of Hyrule, but extra traversal options like being able to climb mountains, fly through the air atop certain Pokémon or fully explore hidden nooks and crannies sounds very appealing indeed.

If Pokémon Sword and Shield got one thing right, it was its eclectic bunch of superbly written characters. We’d love to see this trend continue in Pokémon Legends Arceus, especially when the historical setting could provide all sorts of fun characters and archetypes.

Earlier we mentioned that recent Pokémon games’ animation quality has been lacking, particularly when it comes to Pokémon battles. That’s because the same animations have been consistently reused since the first true 3D entry in the mainline series, Pokémon X and Y.

While we know it’s important to many fans that the National Dex (the complete roster of Pokémon across all generations) be represented again in some way, we think it could be equally beneficial to feature a scaled-back roster of Pokémon with a greater variety of revamped animations.

Touching a bit more on that, it’s possible that given the time period in which Pokémon Legends Arceus takes place, it’s possible that certain Pokémon might not even exist yet. This makes Pokémon Legends Arceus a prime testing ground for Game Freak to really wow us with improvements to animation quality across the board, particularly if there are fewer Pokémon overall to work with.